We all stumble in many ways. Anyone who is never at fault in what they say is perfect, able to keep their whole body in check.
James 3:2
DailyVerses.net

My last to you was of the 16th of December; since which, I have received yours of November 25 and December 4, which afforded me, as your letters always do, a treat on matters public, individual, and economical. I am impatient to learn your sentiments on the l 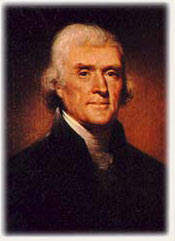 ate troubles in the Eastern states. So far as I have yet seen, they do not appear to threaten serious consequences. Those states have suffered by the stoppage of the channels of their commerce, which have not yet found other issues. This must render money scarce and make the people uneasy. This uneasiness has produced acts absolutely unjustifiable; but I hope they will provoke no severities from their governments. A consciousness of those in power that their administration of the public affairs has been honest may, perhaps, produce too great a degree of indignation; and those characters, wherein fear predominates over hope, may apprehend too much from these instances of irregularity. They may conclude too hastily that nature has formed man insusceptible of any other government than that of force, a conclusion not founded in truth or experience.

Societies exist under three forms, sufficiently distinguishable: (1) without government, as among our Indians; (2) under governments, wherein the will of everyone has a just influence, as is the case in England, in a slight degree, and in our states, in a great one; (3) under governments of force, as is the case in all other monarchies, and in most of the other republics.
I hold it that a little rebellion now and then is a good thing, and as necessary in the political world as storms in the physical. Unsuccessful rebellions, indeed, generally establish the encroachments on the rights of the people which have produced them. An observation of this truth should render honest republican governors so mild in their punishment of rebellions as not to discourage them too much. It is a medicine necessary for the sound health of government.To have an idea of the curse of existence under these last, they must be seen. It is a government of wolves over sheep. It is a problem, not clear in my mind, that the first condition is not the best. But I believe it to be inconsistent with any great degree of population. The second state has a great deal of good in it. The mass of mankind under that enjoys a precious degree of liberty and happiness. It has its evils, too, the principal of which is the turbulence to which it is subject. But weigh this against the oppressions of monarchy, and it becomes nothing. Malo periculosam libertatem quam quietam servitutem. Even this evil is productive of good. It prevents the degeneracy of government and nourishes a general attention to the public affairs.

If these transactions give me no uneasiness, I feel very differently at another piece of intelligence, to wit, the possibility that the navigation of the Mississippi may be abandoned to Spain. I never had any interest westward of the Allegheny; and I will never have any. But I have had great opportunities of knowing the character of the people who inhabit that country; and I will venture to say that the act which abandons the navigation of the Mississippi is an act of separation between the Eastern and Western country. It is a relinquishment of five parts out of eight of the territory of the United States; an abandonment of the fairest subject for the payment of our public debts, and the chaining those debts on our own necks, in perpetuum.

I have the utmost confidence in the honest intentions of those who concur in this measure; but I lament their want of acquaintance with the character and physical advantages of the people, who, right or wrong, will suppose their interests sacrificed on this occasion to the contrary interests of that part of the confederacy in possession of present power. If they declare themselves a separate people, we are incapable of a single effort to retain them. Our citizens can never be induced, either as militia or as soldiers, to go there to cut the throats of their own brothers and sons, or rather, to be themselves the subjects instead of the perpetrators of the parricide.

Nor would that country quit the cost of being retained against the will of its inhabitants, could it be done. But it cannot be done. They are able already to rescue the navigation of the Mississippi out of the hands of Spain, and to add New Orleans to their own territory. They will be joined by the inhabitants of Louisiana. This will bring on a war between them and Spain; and that will produce the question with us, whether it will not be worth our while to become parties with them in the war in order to reunite them with us and thus correct our error. And were I to permit my forebodings to go one step further, I should predict that the inhabitants of the United States would force their rulers to take the affirmative of that question. I wish I may be mistaken in all these opinions.

Jefferson Rebellion as indicated in the letter above has been neutralized in America. The control is runs deep in a different ways with more than 10% of people in government and many in a law enforcement position. Then there is another group whom have legal authority over the public and rule in many ways. We see it with the environmental movement, building controls and many other ways. All have legal authority over our lives.

So Look to God and the bible for answers. Be prepared for Christ’s coming. Be ready for what ever God calls you to do. History is a good study in this area. I see many parallels to 1938 and 1939. Or even further back, the fall of the Roman Empire and the slaughter of many Christians. What I don’t see is an America of today beyond 2020. And I believe we are at Number 3 above.